For the 1974 model, the Porsche 911 featured a new look, somehow similar to the older model, but it was different. Both the interior and the engine were revised to offer more comfort and power.

By 1974, the Porsche 911 already gained its place in the motorsport arena with victories on snow, tarmac or gravel, in the rally, or endurance racing. The second generation came to improve the street vehicles, for the general public and for those who were on the market for a daily-driver sports-car.

The 1974 model was redesigned for the first time in the car's history. The raised bumper design with black plastic bellows on the sides to absorb shocks was a key feature of the car. But the car's profile remained the same 911 as before, with an almost vertical windshield, a curved roof, and swept-back rear windscreen in the same line with the engine lid. In the back, the bumper featured two big rubber buffers and, between them, the license plate.

Inside, the cockpit featured sport seats in the front and two smaller ones in the back, which were hard to use. The five-dials instrument cluster offered information regarding the oil pressure, oil temperature, fuel level, tachometer in the middle, the speedometer, and, on the right, an analog clock. The ventilation controls were placed at the same level as the steering wheel and the stereo. 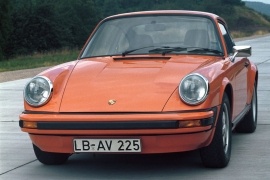