After 12 years since the introduction of the GTS version in the Porsche 911 family, the German carmaker launched a new edition for the 992 generation.

In 2019 Porsche launched a new generation for its iconic 911 model, named 992. The plans were to make a GTS version in a year or so, but due to the pandemic situation that struck the world in 2020, those plans were postponed, and the GTS appeared on the market two and a half years later. Still, Porsche fans were patiently waiting for it since it represented one of the best price/performance versions in the 911 range.

On the outside, the carmaker did a few touches here and there to emphasize the differences between the GTS and the non-GTS versions. The LED headlights received darkened areas, while other black elements adorned the front side scoops, the splitter, rocker panels, and the front of the rear fenders.

Inside, the carmaker relied on the same instrument cluster with an analog tachometer in the middle flanked by digital screens as the rest of the 992 range. The PCM infotainment system provided connectivity with both Apple CarPlay and Android Auto, and its screen sat above the center stack. Also, black was the dominant interior color of the car.

Porsche built the 992 GTS with rear or all-wheel-drive, and in all three body versions: coupe, convertible, and Targa. The re-tuned flat-six engine provided 30 more ponies than the 911 Carrera S and the previous 921 GTS version. 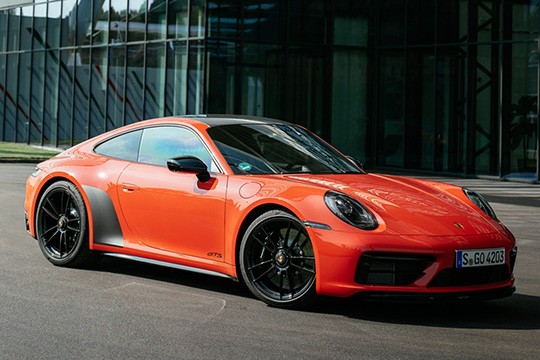