The Porsche 911 was the best selling sports car in the world and every newer generation was better than the one it replaced it and the 2015 Carrera was no exception.

Even though it wasn't a completely new model, the 2015 Carrera had so many parts changed that it was hard to say that it wasn't a new vehicle. The basic 991 bodywork (code-name for the generation launched in 2012) remained the same, but some minor changes were noticed. The bumpers were slightly different, with bigger air-intakes. On the rear spoiler, the engine vents were longitudinally placed instead of transverse.

Inside the cabin, the Carrera featured the same two bucket seats in front and two cramped seats in the rear. The dashboard was modified and featured a Porsche Communication Management System (PCM) that included a 7" touch-screen display. It could be connected to an iPhone via Apple CarPlay and the interior designer assigned a special place for the phone in the center armrest where the phone could have been charged.

The real changes are under the bodywork. The Porsche Active Stability Management (PASM) was a standard-fit for 2015 911 and that included a lowered ground clearance by 10 mm (0.4") when compared to the 2012 911. The engine displacement was decreased to 3 liters but with two turbochargers. The standard transmission for the Carrera was a 7-speed manual, but a PDK (Porsche Dual-Clutch) was available. 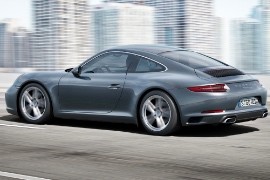