The iconic Porsche 911 was born in 1964 and it became one of the most iconic sports cars in the world. Its shape was kept over the years, with its sloped rear engine bay.

The design was an evolution of the Porsche 356 model. The new headlights, higher greenhouse, and the same slope in the back were the main characteristics that defined the classic Porsche shape. Its design was created by Ferdinand "Butzi" Porsche, son of the Ferdinand "Ferry" Porsche. The latter was the creator of the 1936 VW Beetle. That is why the concept of the air-cooled engine in the back was adopted on the first Porsche, the 356, and it was kept on the 911.

The Porsche 356 was a commercial success for the young German company. But there was a need for modernization and, in 1964, the 911 was launched. It kept the same principles of the 356 with a flat-four, air-cooled engine. That led to a different engine lid in the back, with big vents on top of it.

Inside the car, there was a simple flat layout for the instrument cluster. The five-dials concept was kept over the time Another particularity of the Porsche 911 was the starter key on the outside, closer to the window, while most of the other vehicles had it on the inside. Even for that time, the Porsche offered luxurious interior, with leather seats and wood panels. Also, on the dashboard, a stereo was installed.

The simple layout for the engine included a four-wheel independent suspension, which was a great advantage while cornering. The car had more weight on the rear wheels and provided better traction. 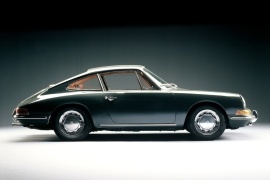