2 1986 Porsche 959 Paris-Dakar Got a Sympathetic Restoration, Still Has Its Battle Scars

The GT4 category was the least powerful class in the FIA GT series. Its vehicles were based on cars available to the public. The Cayman GT4 was designed to fit in that category.

Porsche had a long history of motor racing and its target was to be on top places in all class categories. While the 911 was well known in the GT3 and GT2 classes, the GT4 category was assigned to the Cayman, even though the 911 had the FIA approval for that class as well. But the Cayman GT4 was built and it was a blast.

Unlike its siblings, the race-inspired look was striking. The front apron was lower with a much wider center grille. The side-sills and the side-intakes were larger. In the back, the carmaker installed an adjustable wing. For the rear apron, a diffuser was installed and, unlike the rest of the stable, it featured two exhausts that were not mounted in the middle.

Inside, a roll-cage was available behind the seats, to stiffen the bodywork. The carbon-fiber bucket-seats offered high bolstering. Their center was upholstered with Alcantara. On the center stack, there was no infotainment system. Just a big squared pocket good for some racing equipment.

The suspension was specially developed for the GT4 version. The 4.0-liter 6-cylinder flat engine was naturally aspirated and mated to a 6-speed manual gearbox, with a close-ratio developed for track use. The mechanical differential lock was standard as well. It was a true race-car which was dressed with airbags and a gasoline particulate filter so it could have been driven legally on public roads. It developed 420 hp and it could rev up to 8.000 rpm. 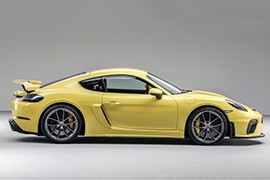