1 The Transformers: Rise of the Beasts Trailer Brings Back Transforming Cars, Packs a Twist

The 718 Boxster S, along with its lesser brother Boxster, was unveiled 20 years after the introduction of the new roadster range from Porsche.

While the first generation was received with mixed feelings, the second generation was praised. With the introduction of the 718 Boxster, the car-maker showed a special commitment to the smallest member of the Porsche family.

At the front, the Boxster S featured a front fascia, with LED headlights. It featured a lower and wider grille in the apron. On the sides, the air-intakes for the mid-mounted engine were deeper and taller, to allow a better air-flow for the engine. The door-mirrors were supported by two struts. In the back, a trapezoidal exhaust was installed in the middle of the apron. A retractable wing was mounted behind the engine lid.

Inside, the sport seats were covered in Alcantara in the middle and featured the 718 badges embroiled on the headrests. For the infotainment unit, the Boxster featured a PCM (Porsche Communication Management) which could have been paired to a smartphone via Apple CarPlay. There was a way to communicate with an Android device as well, but it didn't support Android Auto.

The Boxster S featured a 2.5-liter flat-four engine. It was turbocharged and with direct fuel injection. On top of that, a gasoline particulate filter was added, to decrease the emissions. Due to its lightweight construction and the 350 hp engine, it could rocket from 0 to 100 kph (0-62 mph) in 4.6 seconds and could go further up to 285 kph (177 mph). The PASM (Porsche Active Suspension Management) system was available at extra cost, for those who wished to take their roadster to the race-track. It was available with either a 6-speed manual or a 7-speed automatic (PDK – dual-clutch). 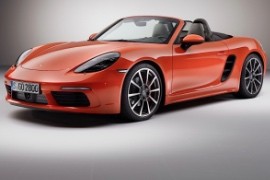