Following the name of the famous 718 roadster, the 2016 Boxster was introduced two decades after the first generation of the small, mid-engined, Porsche.

The new generation took its inspiration from its famous predecessor and some parts looked similar to those found on the 918 Spyder supercar from 2013. The new generation was sleeker and promised to be even better on the tracks and more comfortable on the roads as well.

At the front, the Boxster featured a front fascia, with LED headlights. It featured a lower and wider grille in the apron. On the sides, the air-intakes for the mid-mounted engine were deeper and taller, to allow a better air-flow for the engine. The door-mirrors were supported by two struts. In the back, a trapezoidal exhaust was installed in the middle of the apron. A retractable wing was mounted behind the engine lid.

Inside, the sport seats were covered in Alcantara in the middle and featured the 718 badges embroiled on the headrests. For the infotainment unit, the Boxster featured a PCM (Porsche Communication Management) which could have been paired to a smartphone via Apple CarPlay. There was a way to communicate with an Android device as well, but it didn't support Android Auto.

The basic Boxster was powered by a twin-turbo 2.0-liter direct-injection gasoline unit. It offered a total output of 300 hp and it was paired as standard with a 6-speed manual, while a 7-speed automatic (PDK – dual-clutch) was on the options list. 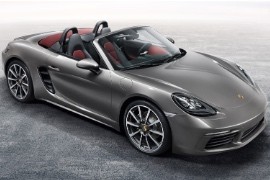