1 1970 Pontiac GTO Saved From Falling Building Has Been Sitting Since 1979, Engine Survives

5 Not a GTO, Still a Great Barn Find: 1966 Pontiac Catalina Is Ready for a New Life

Pontiac introduced the Vibe GT in 2003 as a mix of more vehicles, creating one of the best crossovers on the market, but it was too daring for those times.

Toyota and General Motors joined forces and developed the Matrix for the Japanese automaker and Vibe GT for Pontiac. This kind of cross-brand badge engineering process was unusual for competing companies and more often seen between brands within the same family. But the Matrix/Vibe GT was a daring task, and both manufacturers understood that failure could be supported better if shared, and that was exactly what happened with the duo and was one of the reasons why the Pontiac brand was axed as a brand.

With the GT version, Pontiac aimed at the hot-hatch segment. It just tried to offer something different and more useful for its customers. In the GT trim level, the Vibe featured body-colored bumpers and side protections. In addition, the door-mirror caps were no longer black, and at the front, the bumper received a more aggressive styling with an apron on the lower side flanked by two round foglights.

Inside, the driver was welcomed by a similar ambient as the rest of the Vibe's range, albeit the binocular-style dials featured red lettering and needles. The high-mounted gear stick, placed on the center stack, was unusual but came in handy. Although it was the top trim level, it didn't get the sat-nav system fitted as standard. The front seats received higher bolstering to keep their occupants in place during high-speed cornering.

Under the hood, Toyota's 1.8-liter engine received an upgrade from Yamaha. Thus, it could pump out more power than its siblings, and it was paired exclusively to a six-speed manual. Last but not least, it was an FWD-only affair. 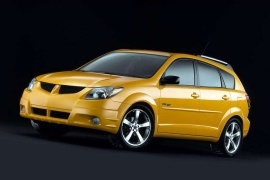