1 1970 Pontiac GTO Saved From Falling Building Has Been Sitting Since 1979, Engine Survives

5 Not a GTO, Still a Great Barn Find: 1966 Pontiac Catalina Is Ready for a New Life

Pontiac Vibe was the result of a common project between General Motors and Toyota. It was the most fuel-efficient GM car in North America until 2008.

General Motors offered a partnership to Toyota in 1984 in its Californian factory. The result was known as NUUMI (New United Motor Manufacturing Inc.). It was a factory that lost money for both partners until 2009 when it was shut down by Toyota after GM pulled back due to the closing of the Pontiac brand.

Based on the same platform with the Corolla, the Vibe was the twin brother of the Matrix with which it shared most of the components. The design was a mix between Toyota's angular styling to the newly discovered cross-over segment. The front fascia was with the characteristic Pontiac elements. But the side windows were closer to the Corolla Verso.

Inside, the Vibe featured a high seating position, like in an SUV. The instrument cluster was arranged with four chromed dials. The high-mounted audio system offered as standard was a CD-radio, with an option for a 6-CD in-dash audio system. A DVD-based navigation system was on the options list.

In the rear, the bench was foldable, forming a completely flat floor. Even the front passenger seat could have been folded to extend the loading area up to 8 feet long (2.44 m). A 110 V power outlet was included in the dashboard, which was good for camping.

The Vibe was offered with a choice of engines from Toyota. It was available with a 5- or 6-speed manual. A 4-speed auto was on the options list, depending on the engine version. 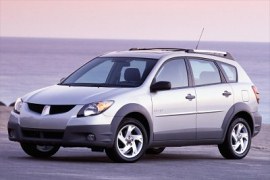