Considered the first muscle car, the Pontiac GTO is one of the most famous cars ever produced.

Nicknamed the “Goat”, the GTO was built by a GM’s special division and was manufactured between 1964 and 1974, 10 years of great success.

If wondering where the GTO nameplate came from, the Goat was actually intended for racing and the name was inspired from the Ferrari GTO.

As for the younger clients the looks and power mattered the most when it came to buying a car, the GTO had the perfect recipe: a V8 engine mixed with superb styling.

The 1976 model was available in 3 body styles: hardtop, convertible and sports coupe.

Compared to the 1964 GTO, the exterior design suffered minor updates, with the main focus being on performance. Fitted with a new 6.4-liter V8 engine, the Pontiac GTO hid 335 ponies under its hood. It was also available with two extra options: economy and high output - 265 hp with the economy, and 360 hp with the latter.

With all marketing efforts concentrated into earning the younger peoples’ attention, the GTO was also featured in movie, transforming it into a legendary vehicle.

After the GTO’s release, the other carmakers started to design their own models for even more attractive prices: the Oldsmobile and the Plymouth were the main competitors. 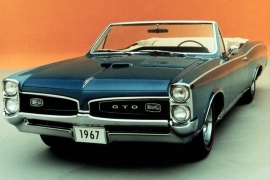