The resurrection of the Pontiac GTO nameplate came in 2003.

It wasn't a completely new car, but a carried-over Holden Monaro brought to the U.S. market from Australia.

Pontiac fans cried for a revival of the GTO ever since the old muscle car was cut down from the production line in 1974. After 18 years, Bob Lutz (former chairman of the GM) announced that a new generation will come soon. It took them three years to bring the car in the U.S. due to some internal rules. As Lutz stated, it was an “unnecessarily long gestation period”. But the GTO finally hit the showroom in North America in 2004.

The long hood raked A-pillars and sloped back made the car look like it was designed for a sequel of Mad Max. A specific Pontiac grille and narrow headlights made a good impression at first sight. To improve the cooling, a wider grille was installed in the apron. From the side, the ascending beltline and the short trunk increase the sporty image. As a final touch, a small wing was added in the back. The twin tailpipes on the driver's side sounded like a true, old-school, muscle car.

Inside, the GTO featured two sport-bucket seats in the front and a bench in the rear. The instrument cluster featured four dials and four LCD under each of them. On the center stack, there was the stereo system and the climate control unit.

The GTO was assembled in Australia with an LS1, 400 hp American engine, and exported in North America. That led to a high sticker price. Since it came too late to the party, with a dress that was no longer in fashion and with a high sticker-price, the GTO experiment died in just two years. 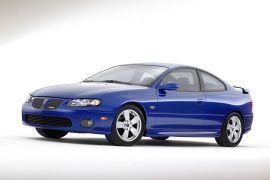