The Pontiac GTO is regarded as the first muscle car ever build, being manufactured until 2006 although the production was stopped between 1974 and 2004.

The first model of the car was powered by a 6.4 V8 engine based on a carburetor which could produce a maximum power of 375 horsepower and a top speed of 120 mph. Combined with a 3-speed manual transmission and a rear wheel drive system, the GTO could accelerate from 0 to 100 km/h in no less than 7.9 seconds which is quite a good time for a car launched in 1965. The GTO is said to be a car especially addressed to the young segment of customers, although it recorded high sales in most client categories. 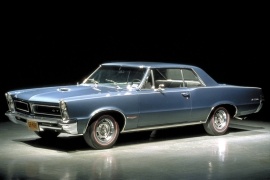