The G6 was the most important car in the Pontiac's lineup since its introduction in 2004, being the best selling model from the American carmaker.

Every now and then, a carmaker had to upgrade its products to keep the sales figures up. The G6 didn't need an upgrade to sell better. It was already on top of Pontiac's sales charts, but after five years since its introduction and a difficult period with a world financial crisis that cut jobs and slimmed the bank accounts, it was necessary to keep the shield up.

For the convertible version, Pontiac didn't, or couldn't use the coupe-cabriolet name because that's what the car was. Its retractable hardtop could disappear at the touch of a button or cover the cabin in the same way. The design team did an excellent job, and the car looked great with the top up or down, and that was not an easy task.

Pontiac upgraded the interior and the materials for the facelifted version to keep its customers coming in showrooms. While the vehicle provided enough room for four average-sized adults getting in and out without tripping over the seatbelt was a different story. Once in, it was a nice ride to go with. Its curved dash panel and upgraded audio system indeed improved the mood level and let the occupants think of something other than the stock exchange.

Under the hood, Pontiac played it safe and installed a 3.9-liter V6 engine that replaced the older 3.5-liter unit. Not only that it provided more power, but it was also more fuel-efficient. 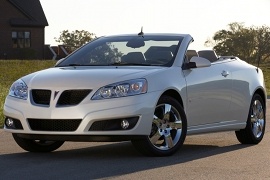 1 1978 Pontiac Trans Am Sitting in a Barn Hides Good News Under the Hood, No Rust

2 Unbelievable $440K Paid at Auction for Movie-Famed Trans Am