A rather rare car, the 2009 G3 was the shortest-lived Pontiac model, as it was only produced for one year.

As the Pontiac G3 is based on the Chevrolet Aveo 5 platform and is mechanically the same car, it is equipped with a 1.6-liter 4-cylinder displacement, mated with a 5-speed manual or a 4-speed automatic transmission. The 1.6-liter engine developed 106 hp.
The design of the front end looked like the G3’s sibling, the G6, while the rear definitely proves that it is actually a Chevrolet Aveo.

While the Aveo was also sold as a sedan version, Pontiac brought to America the hatchback 5-door version only. It was available in a single trim level and included notable options such as cruise control, a sunroof and aluminum wheels.

The G3 was not a fast car, but the fuel consumption was reduced and that was the main reason why this car attracted buyers. The car’s interior was pretty decent, however, low-quality materials were used, so that the price could be kept low. The seats were not very comfortable and the rear passengers did not have enough leg room. 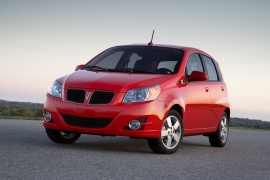