Pontiac was eager to get a better engine for its TransAm Firebird, and it made the RamAir version, which looked wild, and then the carmaker made a convertible out of it.

In 2000, the Pontiac was still riding the high tides, and its cars were selling well, especially the Firebird. It was a sports car, but not as harsh or expensive as a Corvette. It competed against its sibling, the Camaro, and the Mustang, but its pop-up headlights were different, which attracted the customers who were teenagers in the '80s

The main difference was that the carmaker installed a new hood with two bulges opened at the front. Thus, it removed the exhaust vents and tracked more air into the air filter installed just under the nostrils-looking air-intakes. Its bumper was still V-shaped as in the 1997 model but incorporated a pair of wide fog lights placed closer to the car's center. Last but not least, the headlights featured two lamps on each side instead of one as on the rest of the Firebirds. A set of aerodynamically profiled door mirrors and a wing on the trunk enhanced the car's aggressive look. Pontiac offered the RamAir version in three body shapes: coupe, T-top, and convertible.

Inside the cabin, the carmaker ditched the comfortable seats and introduced a pair of high-bolstered bucket seats that provided much better side support. Its front independent suspension and the solid rear axle were not the best choices for a handling vehicle, but they worked well for wide turns on a fast track. The center stack looked very similar to the '97 model but with a CD player on it. Its seven-channel equalizer was challenging to use while driving. But that wasn't a real problem for as long as its customers had the music of a V-8. 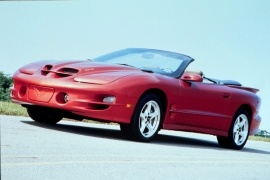 1 Too Old to Drive: 1965 Pontiac GTO Sitting for Decades Is Unrestored, Runs and Drives

2 The First Pontiac Race Car Ever Built Pops Up for Sale, Costs a Fortune