When the demand for more affordable compact sedans grew, Chrysler tried to get a slice of that cake.

The natural choice for a low-budget vehicle was Plymouth, and the product name was Neon. It appeared on the market in 1994, and it represented a new chapter for the American carmaker.

Designed for the younger generation, the Neon was available with a stick shift and could beat the naught to 60 mph (0-97 kph) in less than eight seconds, which were more than enough to enter the freeways. But its customers compared it with the Civic and the Corolla, and it needed to fit on the same performance specs.

But Plymouth did a smart pricing policy and, while the base version was a steal compared to other cars on the market, it showed its low price in every part, such as the 13" steel wheels with dog-dish hubcaps. The overall styling for the base version suffered from one color option (white) and unpainted door handles and mirror caps. Yet, the unusual-looking headlamps with their round design were something that didn't inspire too much appeal. In the four-door version, it allowed the driver to bring a few friends along on their way to the big parking lots in the evenings.

Since Chrysler knew that parents would want their children as safe as possible, it installed standard dual airbags. The materials' quality was not the greatest on the market, with hard plastics on the door panels and dashboard. On the other hand, it provided cup-holders in the center console. That was an appreciated feature, especially by commuters.

The Neon came with a 2.0-liter engine that provided enough power to bring a smile to its users' faces, especially when it was paired with the standard five-speed manual. A three-speed automatic was on the options list. 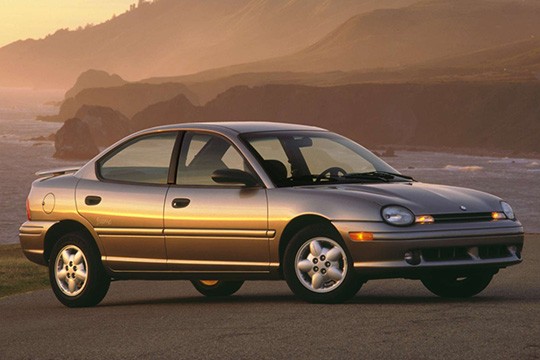