Plymouth filled the gap after the dismissal of Eagle brand and carried over a few models from the axed car brand, such as the Laser.

Designed and built in Normal - Illinois at the Diamond Star plant, the Laser was a rebadged Mitsubishi Eclipse first generation, but without the all-wheel-drive variants offered by the Japanese brand. Plymouth tried to offer a budget sporty compact coupe vehicle under a $20,000 mark and succeeded.

The car’s exterior featured a narrow front end and a flat hood adorned by a bulge. Its short cabin and sloped rear window made the car a fierce competitor for the sport compact market. Its pop-up headlights spoiled the car’s look when they were open but made it look sleek with them closed down. At the back, the horizontal lines with sharp edges left the impression of a much wider car.

Inside, the front seats provided enough room for two adult-sized occupants, but the rear seats were cramped even for small children. Yet, they were good enough to carry some luggage for a longer trip. The trunk was not exactly spacious but was good enough for daily shopping.

Under the hood, Plymouth relied exclusively on Mitsubishi’s engines, either naturally aspirated or turbocharged. The latter and most potent version featured the famous 4G63 powerplant installed on the Lancer rally car as well. Unlike its more famous cousin, the Laser was available only as a front-wheel-drive vehicle. But it could still get an under eight-second nought-to-60 mph (0-97 kph) time. 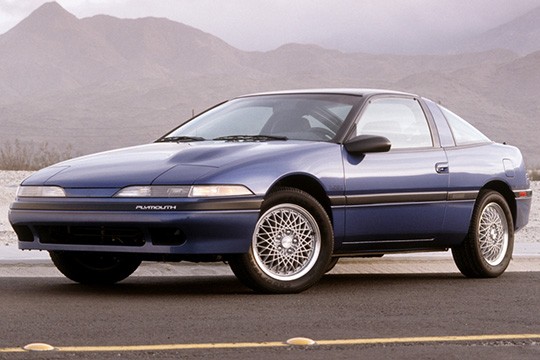