Peugeot introduced the 508 PSE in July 2020, not as a facelift but more as a flagship sedan for the French brand.

Peugeot is one of the oldest brands in the motoring industry. Even if it started with coffee mills and bicycles, the French brand made its way into the world, and its name was tightened with victories on various races such as the LeMans, Paris-Dakar, Pike's Peak or the World Rally Championship.

The 508 PSE featured a new front fascia, with an LED strip for the daytime running lights that crossed the headlight onto the front bumper. The Kryptonite color (a special gray) was offered exclusively on the PSE range. They used the same color for the three-claws badges on the back and the car's side. The coupe-like shape of the 508 sedan was acclaimed for its beauty and its frameless windows.

Inside, the French specialist put the three-claw badge on the bottom of the steering wheel, but in green-lime accents. Another line with the same color crossed the dashboard. The Peugeot i-Cockpit graphic animations and the central 10-inch HD capacitive touchscreen have adopted the division's signature for an even more upscale feel.

The powertrain was a significant development. It featured a plug-in hybrid drivetrain that offered 360 hp. The battery pack could recharge in less than two hours from a 7kW wall-box socket or seven hours from a standard home outlet. It featured a 42 km (26 miles) range on EV mode. On top of that, the 508 PSE was all-wheel-drive. The gasoline engine powered the front wheels while the electric motor sent its power to the rear axle. 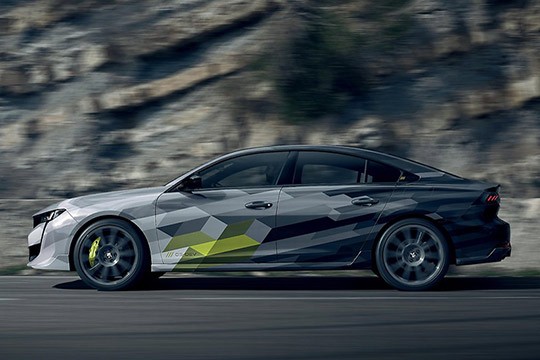