Like its smaller brother, the 3008, the 5008 was upgraded in 2020 as well, in a moment when Peugeot was the European leader in the compact SUV market.

Since 2017, when it was introduced to the market, the 5008 won the hearts (and wallets) of over 300.000 customers. It was an unexpected success for the French vehicle. It was more like a Peugeot 3008 with a longer wheelbase and different back.

The front fascia featured the new design language of the standard LED headlights. Like its smaller brother, it featured the same light strips “fangs” on the front bumper. The 3D design of the grille mimicked a mesh and created a sense of space with its chromed pins. The side-scoops placed in front of the wheel-arches were there only for design purposes. The back of the car featured new LED taillights, including the reversing lamps.

Inside, the car offered more room in the back than its smaller brother, due to a longer wheelbase. It featured the same evolution for the dashboard, with its enhanced i-Cockpit instrument cluster. It featured a new graphic and new options for the 2020 model year. The infotainment unit featured a 10” high-definition display, placed on top of the center stack. Due to the COVID-19 pandemic, in some countries, the 5008 was available for completely online purchase and delivery.

The 3008 was available with a choice of gasoline, and diesel engines. The plug-in hybrid version was not ready when the car was introduced on the market. 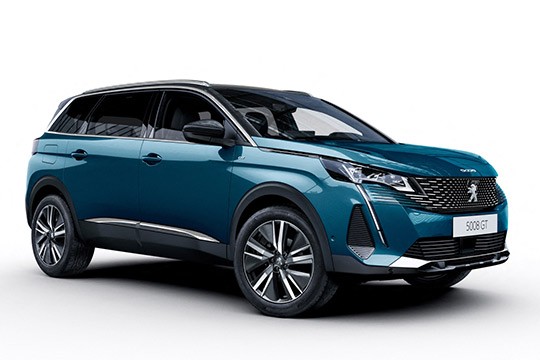