After four years on the market, the 406 model needed a refresh, and Peugeot worked hard to offer a better vehicle to its customers.

After the mid-90s, European customers started to pay more attention to safety rankings. It was an area where the 1995 Peugeot 406 didn't shine with its one-and-a-half star out of five. Its main competitor, the Renault Laguna, managed to get two-and-a-half stars, and that made the Peugeot engineers concerned and the management angry. The revised 1999 model received three stars.

The revised version was not only safer but even better-looking. Its new headlights with clear headlights and an aggressive look were more on the European's tastes. A broad lower grille in the apron flanked by the fog lights evoked a sporty spirit and, for some versions, it was true. The taillights were completely red at the back, with almost undetectable clear areas for the reversing lights.

Inside, the redesigned dashboard featured a new center stack with a wider digital panel for the climate control system. For the instrument panel, Peugeot re-arranged the numbers on the tachometer and introduced a display in the middle, unlike its predecessor, which featured harder-to-follow LCDs.

Under the hood, the carmaker improved the engine lineup. The most potent version received a 210 V-6, while for the fuel-efficient version Peugeot installed the latest, common-rail turbo-diesel engines ranged between 90 hp and 136 hp. Its independent suspension in all corners was an important selling argument, especially against the Renault Laguna. 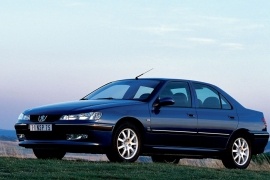 2 Meet the Knusbus, a Peugeot Boxer Van Converted Into an Escape Room on Wheels

5 What Would Hermione Drive on Vacation? An EV, Just Like Emma Watson