Voted the European Car of the Year in 1988, the Peugeot 405 was a family car designed by the French carmaker Peugeot.

While the Peugeot 405 shared its platform with the Citroen BX, the family car had a completely different exterior and interior design.


The Peugeot 405 featured an all-new 4-cylinder XU engine that was previously released with the Peugeot 305.

The modern engine was a special one, and while it was originally designed for 1.4-liter and 1.9-liter displacements, it was the first in the world in its class to offer both gasoline and diesel versions with the same block and on the same production line. Peugeot needed a single engine layout study to cover the entire range, thus, it was a significant saving factor.

The gasoline powerplants available offered between 64 and 158 hp, and one year later, Peugeot introduced new naturally aspirated and turbocharged Diesel engines to the range.

After several updates throughout the years, the Peugeot 405 was replaced by the newly introduced Peugeot 406 in the autumn of 1995.

The 405 was the last Peugeot model sold in the US before the French carmaker’s withdrawal in 1991. 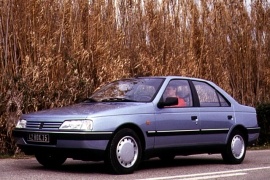 2 What Would Hermione Drive on Vacation? An EV, Just Like Emma Watson