After three years since the launch of the 208 range, Peugeot introduced the much-awaited version, the GTI.

An iconic French hot-hatch that evolved from the 205 to this.

The 205 GTI had its place in automotive history. It was a successful hot-hatch on the European market and rally stages. And, when it was not allowed to run in the World Rally Championship, it went to the toughest rally in the world: the Paris-Dakar and claimed the 1987 victory at its maiden participation. Its successors, such as the 206 GTI marked the return to the WRC arena and scored other victories before it was replaced by the 308 CC WRC. But the history left a legacy to be continued.

The 2016 208 GTI was offered in a 3-door version, with a different stance than its less-powered brothers. The front bumper featured a chequered-flag 3D design. The headlights featured an LED signature, specifically for the Peugeot brand. The side revealed an aggressive stance, like a feline ready to jump. In the back, the wider rear bumper offered a sporty look with its lip on the bottom.

Inside, the 208 GTI featured bucket seats for the front passengers. The interior was garnished with sporty details such as the aluminum pedals and gear-knob, the silver trims on the center stack around the infotainment system, and the bottom of the steering wheel. The instrument cluster featured a binocular look, with the tachometer and coolant temperature gauges on the left and the speedometer and fuel level on the right. Between them, a TFT display was installed for the trip-computer.

Under the hood, the GTI offered a special, 208 hp, engine. The turbocharged 1.6-liter unit was developed to cope well with the daily driving requirements and the weekend races as well. 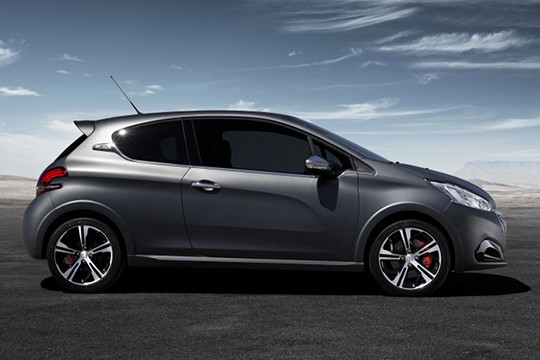