5 Here's Your Chance to Purchase the Only Racing MPV in the World, the Peugeot 806 Procar

The Peugeot 208 with 3-doors was unveiled in 2012 at the same time with the 5-doors version. It replaced the older 207 and it came with an enhanced platform, better materials, and a bigger interior.

Peugeot had a relatively long history of building cars for the supermini segment. The biggest revolution in their family was the 1983 Peugeot 205. Following their naming tradition, it was followed by the 206 and the 207. If the 207 was considered more of an evolution over the 206, the 207 was a bigger step ahead. It was a car that was connected to the Internet.

The supermini car was designed with a more aggressive style. Everything on the front side was proportionally big. The grille included in the bumper, the headlights and the side air-intakes from the lower side of the apron almost covered all the front fascia. The grille above the bumper was minimal. The raked A-pillars looked almost like they were connected to the front wheel arches. A short greenhouse and a roof-spoiler completed the image. The three-door version featured a sportier look and longer front doors to allow access to the rear doors. The rear side windows were fixed.

Inside, the car featured an unusual design with the instrument cluster floating on top of the dashboard and the 7” infotainment display installed above the center console. The French designers didn't go for a regular, simple look. They aimed high for a much younger generation, especially with the 3-door version.

Under the hood, the little Peugeot 208 was equipped with a choice of 8 engines: 3 diesel and 5 gasoline. Depending on the version, the 5- or 6-speed manual was fitted as standard. A robotized 5- or 6-speed gearbox was on the options list. 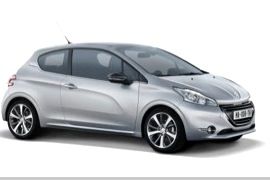