Perodua introduced its third SUV on the market, the Aruz, in 2019, and it was more of a restyled version of the Daihatsu Terios/Rush.

The Malaysian carmaker didn't have the necessary experience in developing a seven-seat SUV from the ground up and asked its long-time partner Toyota to give it a hand. That came with the cost of sharing Perodua's production facility from Rawang, Selangor, and the delay in launching the vehicle. While the Japanese-branded vehicle was introduced in 2017, the Perodua-badged car was launched in 2019.

Its exterior shared the metallic body panels with the Daihatsu/Toyota Rush, but the bumpers, grille, and side sills sported Perodua's design. The side scoops that hosted the fog lights featured a vertical triangular shape at the front like they were pinched toward the front bumper's center. On the sides, apart from the sculptured doors and rear quarter panels, the carmaker installed black plastic side sills at the bottom. In the back, the angular-shaped taillights crossed the quarter panels onto the liftgate.

Inside, the Aruz was exclusively available with seven seats, with the middle row tilting and tumbled forward to make room for accessing the last row. At the front, the instrument cluster showed a clear Toyota styling, with the speedometer and tachometer encircled by light-gray rings and a center-mounted LCD.

Perodua offered the Aruz in two trim levels, but with only one engine and transmission option. The carmaker installed a 1.5-liter gasoline engine under the hood and paired it to an electronically controlled four-speed automatic gearbox that sent the power to the rear wheels. 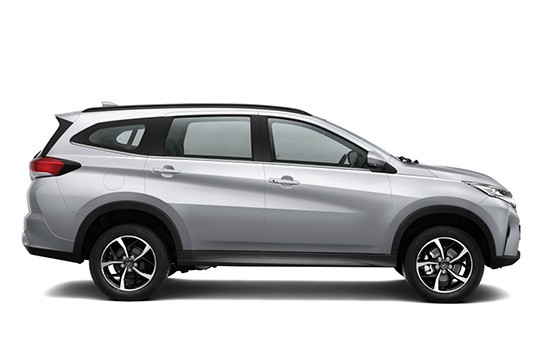