Based on the same mechanical underpinnings with the Ford Mustang GT, the 2000 Panoz Esperante had high hope to get a big chunk of the U.S. sports-cars market, but it didn't.

The American car manufacturer designed a vehicle around Mustang components, and the result was surprisingly good, but the start was very slow, and the learning curve was far too long for some customers. Eventually, the Esperante GT came on the market in 2000 and provided a roadster experience unparalleled by any American car from those times. The company's founder, Dan Panoz, used racing solutions for a street vehicle.

With its aluminum body and subframes, the roadster was very light on its feet. Despite its V-8 engine, it weighed less than any convertible car on the market. The aerodynamically shaped bodywork featured tear-shaped headlights and a power-dome on the hood. Panoz delivered an all-aluminum hard-top for the roadster, in addition to the standard rag-top. In the rear, the four round taillights featured an original design.

Inside, the carmaker took its inspiration from the BMW Z8 with the center-mounted instrument panel installed in an instrument cluster that resembled the older Ford Mustang layout. Its high-bolstered bucket-seats provided great side support for both occupants.

Under the bodywork, Panoz installed more Ford Mustang components. It didn't take only the engine and gearbox. It also used the independent rear suspension (IRS) and the four-wheel Anti-lock brakes system. 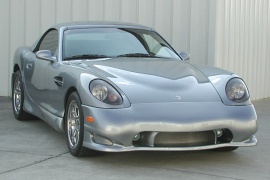