When an exclusive hypercar such as the Pagani Zonda F was not enough anymore, the carmaker made a special offer with a limited series of an open-top version for it.

Pagani unveiled the Zonda F at the 2005 Geneva Motor Show, and its F letter stood for the magic, five-time Formula One World Champion Juan Manuel Fangio. A year later, in 2006, the Italian supercar maker introduced the F's open-top version and built it in 25 units only.

With its handcrafted carbon-fiber bodywork, the Zonda F Roadster showed a very close weight as its coupe sibling. Removing the roof was not a problem since the car already had a very stiff structural rigidity due to the high-strength material. Even the removable top panel was made out of carbon fiber and canvas top.

Inside, everything was handcrafted and assembled with extensive care. The craftsmen took good care of every detail, from the stitches on the leather-clad interior to the steering wheel. The cockpit sported mainly three materials: carbon fiber, aluminum, and leather. There were some bits of plastic for the dials' needles, depending on the owner's choice, a wooden steering wheel. To protect its occupants, Pagani installed a chrome-molybdenum alloy roll-bar behind the seats.

Due to some additional reinforcements, the F-Roadster was only 30 kg (66.1 lbs) heavier than the coupe. But that didn't affect the car's performance. Under the hood, the Zonda F featured a 7.3-liter AMG engine that was powerful enough to rocket the car from zero to 200 kph (0-125 mph) in just 9.9 seconds. Its carbo-ceramic Brembo brakes could stop the car from there in just 4.4 seconds. 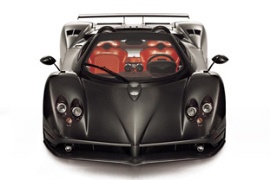