After it built and sold the five Zonda Cinque Coupe, Pagani built another five particular roadster versions for that and sold them before the carmaker even made the first one.

The European regulation prohibited Pagani from registering a Zonda R for public roads, so their owners had to trailer-them onto a race track. Usually, the track-ready vehicles were transported that way, regardless if they were registered or not. The idea came when a Hong Kong dealer persuaded the carmaker to build five units of the Zonda R, but with some comfort and luxury items.

At the front, the Zonda Cinque Roadster featured an additional lip spoiler under the apron, which increased the downforce. On the front fenders, both cars featured air vents to extract the air trapped inside the wheel well, but on the Cinque was with four transverse carbon-fiber slats. A unique detail for the car was the air intake scoop, which stood suspended above the cabin like a hook.

Inside, the carmaker installed a race-inspired interior with carbon-fiber seat-frames, trims, and door panels. Since it was still a vehicle designed for road use, Pagani installed an air-conditioning unit and a sound system on the center stack. The carmaker did not fit the unique, Alcantara-covered steering wheel with an airbag, but it installed the engine settings button on it.

Pagani offered the five units of the Cinque coupe with a re-tuned 7.3-liter V-12 AMG engine. It was paired to a unique six-speed sequential gearbox, which the driver could control via the paddle-shifters behind the steering wheel or by the gear-stick. 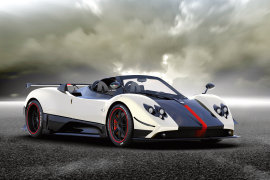