While the European rules and regulations prohibited the Zonda R from being registered for public roads, a Hong Kong dealer insisted on the carmaker building a special series just for them.

Pagani built only five (cinque – five in Italian) units of the special Zonda Cinque. It was lighter, more powerful, and faster than the Zonda F. The carmaker started with the Zonda F and used most of the racing technologies from that, but adapted for road use.

At the front, the Zonda Cinque featured an additional lip spoiler under the apron, which increased the downforce. On the front fenders, both cars featured air vents to extract the air trapped inside the wheel well, but on the Cinque was with four transverse carbon-fiber slats. A roof-mounted air intake scoop increased the car's height while feeding the big engine with more fresh air. The entire bodywork was built from a special material called carbo-titanium, which incorporated titanium inside the carbon-fiber panels for increased strength.

Inside, the carmaker installed a race-inspired interior with carbon-fiber seat-frames, trims, and door panels. Since it was still a vehicle designed for road use, Pagani installed an air-conditioning unit and a sound system on the center stack. The carmaker did not fit the unique, Alcantara-covered steering wheel with an airbag.

Pagani offered the five units of the Cinque coupe with a re-tuned 7.3-liter V-12 AMG engine. It pumped out 76 more ponies than the regular Zonda F. It was paired to a unique six-speed sequential gearbox, which the driver could control via the paddle-shifters behind the steering wheel or by the gear-stick. 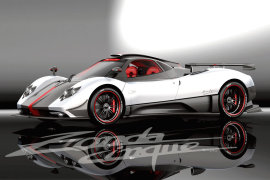