Years after the introduction of the Huayra, Pagani finally decided to cut off its roof and put out the Roadster version in 2017.

Thee Huayra was unveiled at the Geneva Motor Show in 2017. The purpose was to achieve a lighter car than the coupe and Pagani managed to do that by using new materials, such as carbon-titanium used for the chassis. The Huayra Roadster’s weight was only 1280 kg.

The car did not borrow components from its predecessor, everything was changed for a more aggressive look. The car came with new alloy wheels, new tires specially made by Pirelli with the producer’s name, a new exhaust design and for the interior, new stitching designs were used. Buyers could choose between different themes and colors for the interior.

Some distinctive shapes can be seen in the front and rear where additional vents can be seen, especially on the humps above the engine. The Pagani Huayra Roadster is powered by the Mercedes-AMG M158 engine. The twelve-cylinder engine, built specifically for Pagani by Mercedes-AMG, has benefited from the research and development done for the Huayra BC, delivering a power of 764 HP at 6200 RPM, with a torque of over 1000 NM already available at 2400 RPM. Only 100 of Huayra Roadsters were manufactured and each of them was sold. 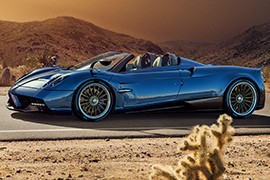 1 Pagani C10 Will Make Its World Premiere on September 12

3 Pagani Huayra Gets Virtual Refresh, Looks Ready for Another Decade of Wonders

5 A New Pagani Zonda 760 Roadster Is Coming to Town, but How Can That Be?