Opel introduced the Grandland X in 2017 as a replacement for the already old Antara SUV, and it built it under the new PSA management.

After GM sold Opel and Vauxhall to the French carmaker Peugeot, the new owner started to dictate its cost-cutting measures. One of them was introducing a new SUV based on the same PSA EMP2 platform as the Peugeot 3008/Citroen C5 Aircross. Unlike the Antara, the Grandland X was no longer all-wheel-drive, but since most European customers bought 2WD SUVs, that wasn't a problem. Yet, if they really wished an all-wheel-drive version, Opel introduced, later on, two hybrid versions.

Despite sharing more parts with the Peugeot and Citroen, Opel managed to keep its identity. It featured a pair of swept-back headlights that incorporated the LED daytime running lights with a design that resembled the Insignia. Its black grille with a 3D pattern sported a chromed bar with the Opel badge in the middle, while on the sides, the sculptured doors looked similar to those from the Astra. The car's designers made a floating-roof look at the back, with a D-pillar blackened on its upper side.

Inside, the Grandland X featured an analog instrument panel with two wide dials on the sides flanking a TFT screen between them and two gauges on above them. Opel installed a touch-screen infotainment system with screen mirroring, Apple CarPlay, and Android auto depending on the trim level and options. The German carmaker designed the front bucket seats, which provided good comfort, while in the back, the split-folding bench could accommodate three people.

Under the hood, Peugeot installed a wide engine range between a fuel-efficient, but sluggish, 1.2-liter turbocharged unit. There were also two turbo-diesel versions and two hybrids. 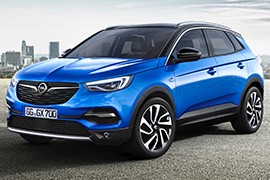