Opel introduced the fifth generation of the Combo in 2018 based on the same platform as the French Citroen Berlingo and Peugeot Partner/Rifter.

While Opel built the first three generations of the Combo on its platforms, the fourth was a badge-engineered Fiat Doblo, one of the best-selling MPVs on its segment in Europe. For the fifth generation, things went differently after PSA (Peugeot-Citroen) bought the German carmaker. Thus, the 2018 Combo was a re-badged Citroen Berlingo-Peugeot Partner.

Like its French siblings, the 2018 Combo didn't look like a utility vehicle anymore. Even though it sported vertical side panels and a steep windshield, it looked more suitable to host people inside in e field trip than to a construction site. At the front, Opel designers made a broad grille with the company's logo on the upper side. The plastic bumper was tall and, on its lower side, it featured a trapezoidal grille flanked by two scoops where the carmaker installed the fog lights.

Inside, the Combo featured an interior inspired by the furniture world, and the designers made the cabin to be functional. Also, they took greater care of the material's quality, especially for the upper trim levels.

Since the platform is the same as the one from a passenger car, the ride was smoother. The available engines were a 1.2-liter gasoline engine with 110 hp mated to a 6-speed manual gearbox and another 1.2-liter turbo with 130 hp paired to an 8-speed automatic transmission. For diesel fans, there was also a 1.5 liter in three outputs versions: 75 hp, 100 hp, and 130 hp, respectively. 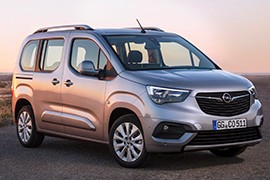