In late 2022, Opel unveiled the electric version of the Astra's sixth generation, in both shapes as a compact hatchback or a station wagon, traditionally named Sports Tourer.

After Peugeot-Citroen bought the German automaker from GM, it shared the platforms among the brands. Thus, Opel received the EMP2 base used for the Peugeot 308 and built the Astra on it starting in 2021. Later on, in 2022, it unveiled an all-electric version of its famous vehicle on the European market in the form of the Astra Electric and Astra Sports Tourer Electric, respectively.

One of the things that the new owner didn't want to change was the brand identity, and that was clearly viewed on the Astra's front fascia. Thus, the so-called "Opel Visor" was carried over from the already-launched Opel Mokka. Unlike its IAC-powered brother, the Electric version didn't sport the same air inlets at the front since it didn't need them. Like its 5-door sibling, the Sports Tourer shared most of its body panels with the rest of the Astra's range. Yet, the rear bumper was slightly different, with a narrower diffuser underneath the rear bumper.

Inside, the carmaker installed a fully digital Pure Panel with two large 10-inch widescreen displays. The dashboard's minimalist design and the center console's clean lines were part of Opel's design philosophy. The 2023 Astra Sports Tourer Electric didn't lose any of its cargo capabilities since the battery pack was mounted underneath the floor. Thus, it could provide 516 liters (18.2 cu-ft) of space with the rear bench up or 1,553 liters (54.8 cu-ft) with the backseats folded down. 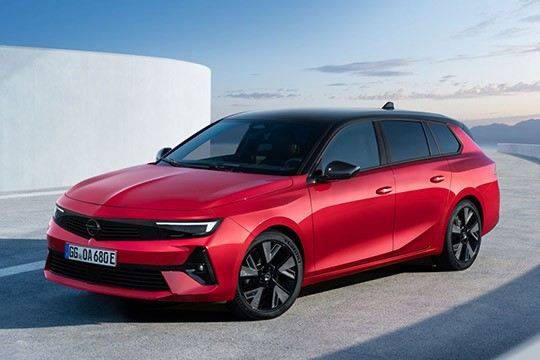