Opel introduced the sixth generation of the Astra in 2021, but, unlike its predecessors, it wasn't allied with GM anymore.

Yet, it offered the car in a shape that made it desirable by many: as a station wagon.

After Peugeot-Citroen bought the Opel/Vauxhall duet, it started to fix things in the financial department. Moreover, it considered that it has to use a common platform for all three European brands. But what it did clearly understand its new owner was that it had to leave the brand's image on the car. So it couldn't just replace the badge and the nameplate.

Thus, the vehicle introduced the Opel Vizor-themed front fascia carried over from its crossover sibling, the Mokka. Its bumper sported a wide grille flanked by side scoops where the carmaker installed the fog lamps. Its profile showed a longer bodywork by 10.6" (27 cm) than the five-door version. A longer roofline was required to cover the trunk area, while the rear tailgate was not as raked-forward as the hatchback version. That added length was not made entirely by the rear overhang but also by increasing the wheelbase.

Inside, the cabin was very similar to the hatchback version, with a digital cockpit and an option for a fully-glazed, three-parts dash panel that surrounded the driver. Following the same minimalist design concept of the carmaker, the design team created clear lines on the center console. Unlike its other European siblings, the Astra installed a pair of AGR-approved seats with zero-gravity rankings. For the rear side of the cabin, though, Opel rearranged the split-folding bench and increased the trunk volume up to 1,634 liters (57 cu-ft) without any seat up. 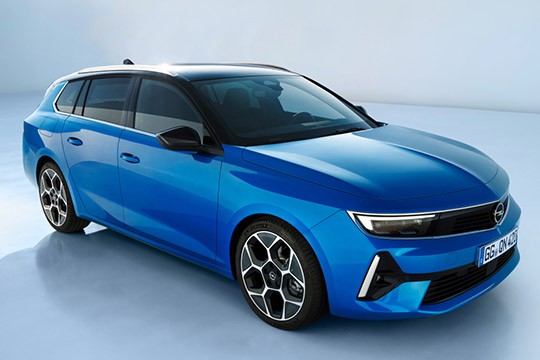