In 2021, Opel opened the sixth chapter of the Astra's book, but, unlike its predecessors, it didn't share its platform with other GM products since it had already joined the Stellantis group together with its new owners, PSA (Peugeot-Citroen).

Since it used the EMP2 platform used by Peugeot for the 308 lineup, which was available as an electric version, it was only a matter of time before the Astra could offer an electron-powered version. That came in late 2022 in the form of Astra Electric, which was available in two bodywork versions: a five-door hatchback and a station wagon. The latter was traditionally named Sports Tourer.

The all-electric version sported a similar shape as the rest of the Astra range. It shared a slightly modified version of the new Opel Vizor front fascia, albeit it didn't have the slats needed to cool the engine since it didn't have an IAC. The car's profile revealed an angular shape with an up-kick for the C-pillar, with the A- and B-pillars blacked out. At the back, the lower bumper was slightly different since it didn't have to conceal an exhaust tip.

Inside, the carmaker installed a fully digital Pure Panel with two large 10-inch widescreen displays. The dashboard's minimalist design and the center console's clean lines were part of Opel's design philosophy. The 2023 Astra Electric featured a pair of ergonomic Active Sports seats, optionally wrapped in Alcantara, which promised a comfortable ride and good side support for their occupants. In the back, a split-folding bench provided room for three adults. 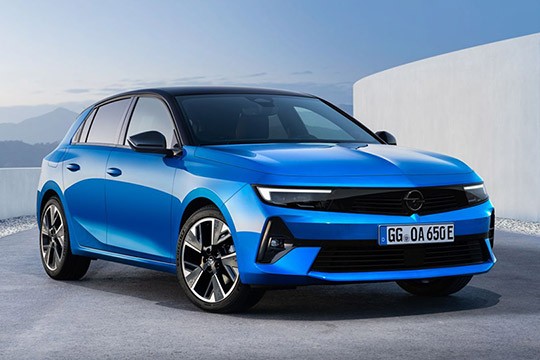