The fourth generation of the Opel Astra, or Astra J, was unveiled at the 2009 Frankfurt Motor Show. It competed successfully in the most competitive compact segment.

The Astra didn't have the hi-tech look of some of its competitors or the low price of the others. It didn't have the high quality of the interior either. But the overall price/value package was among the best in its class. That is why it became one of the most known cars in Europe.

The styling was inspired by the Insignia, with curved headlights on their lower part. The large and narrow grille was accompanied by another grille in the bumper. Both did the same job, of cooling the engine and the AC compressor. From the side, a corner-window was installed in front of the rearview mirrors.

Inside, the dashboard looked high-tech for the time it came on the market. It featured four round dials on the instrument cluster, with the engine temperature and fuel level in the upper-middle sector. Between the large speedometer and tachometer, there was an LCD screen. The seats were awarded by a German institute for comfort and that said a lot about the car.

Under the hood, there were engines for everyone. From a naturally aspirated 1.4-liter unit to high-tech turbocharged diesel and gasoline options. The Astra had something for every pocket and every taste. It featured manual and automatic transmissions. And, due to its unique Watt rear suspension, it offered one of the best compromises for a rear semi-independent suspension. 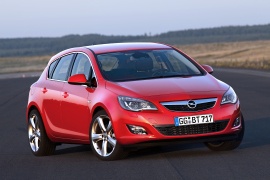