In late 2010, Opel finally managed to introduce a facelifted version for the Antara, an SUV that was supposed to be a money-maker for the then-European arm of GM.

With the financial crisis already gone, the market started to recover. Opel, on the other hand, was in dire financial shape. Still, it tried to recover and improve its SUV in a market that shifted from minivans to these kinds of vehicles. The idea was great, and the German brand had a good starting point. And yet, it didn't make it.

One of the most important changes was on the front fascia, where the Antara received new angular headlights. They matched the chromed double-slat mounted on the grille between them. In addition, a pair of foglights surrounded by chromed trims found its way on the lower bumper, while the door mirrors received new blinkers. At the back, there was a new design for the taillights in the rear and repositioned reversing lights.

Inside, the Antara offered five seats as standard, and the carmaker noticed that customers were not very excited about the seven-seat version, so it dropped it. However, it focused on the dashboard, which featured a new design, with lines carried over from its compact sibling, the Astra. Moreover, a new infotainment unit with a screen placed atop the center stack made its way into the Antara options list.

Opel already switched to Euro 5 emission standards, so the Antara got only these types of engines, either gasoline or turbo-diesel. The former 3.2-liter V6 was cut from the options list, and thus the most potent version remained a 2.2-liter turbocharged oil-burner that provided 181 hp (184 PS). 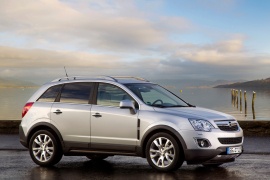