Sharing most of its underpinnings and powertrains with the Chevrolet Captiva, the Opel Antara was a compact crossover SUV designed by the German carmaker between 2006 and 2015.

Built on the Theta platform, the Antara offered seating for 5, while the Chevrolet Captiva could accommodate up to 7 occupants.

The model was sold under different names depending on the market, such as Vauxhall Antara in the UK, Holden Captiva MaXX in the Australasia and as Saturn Due in Canada and the US.

Resembling the Opel Antara GTC Concept presented in 2005 at the Frankfurt Motor Show, the final version featured a stylish exterior design with a sporty and athletic look.

Inside, the driver-oriented cockpit was practical and looked well, with its design getting close to that of a more luxurious sedan. Other eye-catching details inside the cabin were three large round air vents and a distinctively shaped handbrake grip.

Space-wise, the new Antara offered a roomy cabin with great legroom and headroom for all occupants. The trunk was a good size offering a transport volume of 370 liters, 865 liters with the folded bench and up to 1420 liters when loaded to the roof.

Safety was also considered with fron and side airbags, head curtain airbags, three-point seat belts and head restraints, as well as belt-face limiters and seat-belt pre-tensioners.

The Opel Antara was available in three trim levels: base, Antara Edition, Antara Cosmo. Even with the base trim level, the Antara was well equipped with fog lamps and halogen headlamps, air-conditioning, power heated exterior mirrors, Board Info Display, front and rear power windows, a collapsible rear bench and lots of storage spaces and nets on the center console and on the back of the front seats. 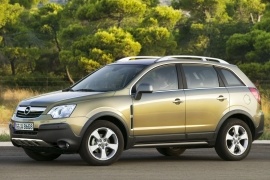