The second generation of the Oldsmobile Aurora lasted only three years before GM dismissed it due to its low sales, despite being better at anything than its predecessor.

When Oldsmobile introduced the Aurora lineup, it tried to offer an upscale model to compete with other premium vehicles. On the second generation, it altered the strategy and made it closer to the sport sedan market. But the carmaker forgot to adjust the design accordingly. Instead, it tried to sell a premium-looking vehicle with a sporty drivetrain, which didn't end well.

The car's look featured the same unusual front fascia that sported horizontal, narrow headlights with rounded endings and a closed panel between them. Oldsmobile had to rely on the bumper-mounted lower grille to cool the engine, which didn't look too sporty. Designed in the full era of bio-design trend, the Aurora featured long, curved lines over the bodywork with slightly enlarged front and rear fenders. Its cab-forward look and sloped rear window created an image of a melted car rather than a sharp, sporty one.

Inside, Oldsmobile used its experience to create a comfortable, luxurious-looking interior. The fine leather upholstery and walnut veneers could suit any Cadillac or other premium brand but didn't match a sport sedan. In the instrument cluster, the designers considered that black dials and white needles could fit the owners' needs except that they needed better eyes, and most of the Oldsmobile's customers were not that young anymore.

Under the hood, the Aurora received a new, 3.5-liter V-6 in addition to the already known 4.0-liter V-8. Oldsmobile paired both of them with a four-speed automatic gearbox. 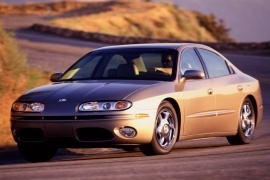