Nissan introduced a facelifted version for its biggest pickup, the Titan, in 2008 as a 2009 model and brought it into a few cab versions.

The U.S. pickup market was the most competitive in the world. Since it was a high-volume segment, most carmakers tried to get a slice from it. As a renowned 4x4 maker, Nissan couldn't stay aside and introduced the Titan as its full-size contender to that segment. It followed the same recipe as the American carmakers and built a strong chassis used for the Infiniti QX56 as well.

The Titan received a new front fascia with matte-finish grille and body-colored bumpers both front and back, depending on the trim level with starting with the 2009 model. There were two doors at the front and two rear-hinged doors in the back in the King Cab version. Nissan offered it with a choice of two wheelbases options and two different beds in the back. The Titan King Cab featured a lower ground clearance for the base level since it was rear-wheel-drive only.

Inside, despite its jump-seats in the back, it was roomy enough for up to five adults. Nissan built it more for work and less for fun, with hard plastic door panels and a dashboard, which were easier to clean. It did have something more to offer on the upper trim levels, including a premium sound system signed by Rockford Fosgate with XM radio.

Under the hood, Nissan didn't bother to offer a wide engine range. It installed a 5.6-liter V-8 engine paired to a five-speed automatic gearbox as standard, regardless of the trim level. The 4x4 versions also received a high and low transfer case. 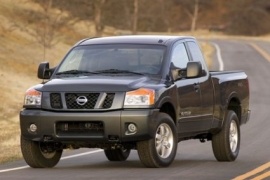