There are not many cars built in Japan that gathered so much attention such as the Nissan Skyline GT-R R34.

In 1999, Nissan launched the fifth generation of the Skyline GT-R. Right from the beginning, it also introduced the V-Spec version. From the outside, it had some specific details. There were more air-intakes in the front bumper then were the extracting air-scoops on the hood and in the upper back of the front fenders. The widened body with flared fenders was part of the Nissan GT-R design cult. In the rear, on the trunk, there was a carbon-fiber adjustable wing. A carbon-fiber diffuser was installed in the back. For the cars imported in the U.K., full underbody diffusers were installed.

Inside, there were two bucket-seats in the front with high bolstered sides. In the rear, there were two seats installed. The special TFT screen on top of the center console was showing various car statuses such as the boost pressure, G-Force (for acceleration, braking and side). The V-Spec added the temperature for the intake and exhaust gas.

From the performance point of view, the ATESSA E-TS Pro system was different than on the other GT-R versions. The limited-slip differential in the back was electronically controlled to improve traction, unlike the mechanical differential on the GT-R. The V-Spec also had a firmer suspension than the regular version. 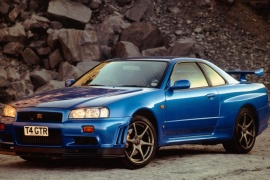