In 1995, Nissan introduced the fourth generation Skyline GT-R, also known as the R33.

The new car used the same RB26DETT engine from the R32. It mainly tried and succeeded in improving on the previous model. It featured improved computer parameters for the ATTESA-ETS all-wheel drive system and Super HICAS four-wheel steering concept. The power output was officially claimed as 280 hp, but in fact it was 302 hp. The R33 was longer and wider than its predecessor and introduced minor visual changes both on the inside and outside. The Skyline GT-R R33 came standard with Brembo brakes and as of 1995 with standard airbags. 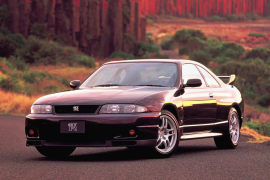