The best-selling crossover in Europe, Nissan's Qashqai is also the Japanese carmaker's most successful model in Europe in all of its 83-year old history.

The second generation was not exactly due for a mid-cycle facelift, since it continued to have an unrivaled market share, however, Nissan decided to produce one anyway.
The biggest changes for the facelift are found on the exterior, which now features an integrated front bumper as standard, with vents on each side aiding engine cooling. The updated front end is also adorned with the latest evolution of Nissan's "V-motion" grille, which accompanies two new versions of the Nissan badge, depending on whether the model is fitted with Intelligent Emergency Braking (IEB) or not. New headlamp clusters with a redesigned "boomerang" Daytime Running Lamp signature complete the revamp.
The Qashqai won the hearts of its buyers due to its multiple qualities. The trunk space was one of the biggest in its class. The load capacity was 430 liters, so it was ideal for a family getaway. The rear seats were foldable, increasing the load capacity at 1596 liters. The cabin itself was a roomy one, with enough leg space for the passengers in the back, as well as enough huge headroom for everybody in the car.
Safety was not disregarded and important features are available for the standard trim level: auto emergency braking, forward collision warning and lane departure warning. The rear parking sensors and the reversing camera was still present, carried over from its predecessor. 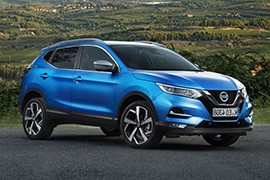