The first generation of the Nissan Qashqai was a huge success on the European market.

The car maker experience in the 4x4 segment payed off. In 2010, the car went through a major facelift.

The first generation of the Nissan Qashqai landed on the market when the automotive industry was hit hard by the world economic crisis. Despite the odds, the Japanese compact SUV was well received by the market and it was sold in high numbers. The sales started in 2007 and by the time the world economy was still suffering from the crisis, the little Qashqai exceeded 200.000 units per year. After the 2010 facelift, the numbers jumped again over 300.000 units mark.

Qashqai received an ample boost of image with the introduction of the mid-life cycle refresh. A new front fascia, with a more dynamic look was far more appealing for customers. The grille, and the hood, were refreshed too. In the back, LED taillights were installed instead of the regular light bulbs.

Inside, the Qashqai offered room for up to seven passengers in the +2 version, which featured a longer wheelbase. The basic equipment was decent and it even featured standard Bluetooth connectivity with the audio system. The on-board computer received a white LCD screen placed between the tachometer and the speedometer.

For the engine bay, the car lost its previously used 2.0-liter turbodiesel engines and new, 1.6-liter units were installed. Even though they lost some horses on the way, the torque was the same but at lower rpms, which enhanced the fuel efficiency. 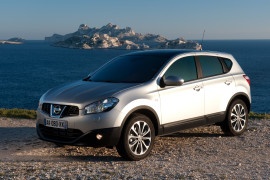