The second generation of the Navara came in three cab designs: Simple, King, and Double.

On the European market, it was named Navara, while on other markets wore the name Frontier.

The King Cab version was built with a set of rear-hinged half-doors in the back. It even featured two tiny folding seats that could have been used in an emergency. Those were not for daily use unless the occupants were children sized or children. The front of the car was the same but the rear bed was longer than in the double-cab version. Its length was enough to accommodate two dirt-bikes side by side or a 4x4 ATV.

Inside, the Navara came equipped with SUV-like features such as automatic climate control, leather heated seats, and navigation system. It could be fitted with a rear-view camera as well. But the car-maker didn't pay too much attention to the safety and the car received a shameful one star with a strikeout in the EuroNCAP test. After an emergency re-work on the car, it could manage a pitty 3-star rating.

The King Cab was available with a four-wheel-drive system and a low-range transfer box. Depending on the market, it was available with a wide choice of gasoline or diesel engines. In Europe, there were two versions with a 2.5-liter inline-four or a 3.0-liter V6. It could carry up to one ton (2204 lbs). 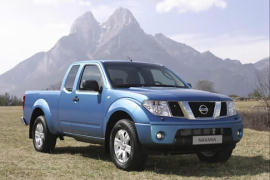