The first generation of the Leaf was a big punch against the internal combustion car market. Even though it wasn't the first electric car, it was the first that mattered.

After a few delays in production, the first Nissan Leaf was launched in 2010. To make the car appealing, it was marketed as a compact hatchback vehicle. It was launched at the same time in Japan and in the U.S. It was the first affordable electric vehicle that could run 160 km (100 miles) on one charge and it could have been recharged from a regular power outlet at home. The charging stations were a dream in 2010.

The car featured a futuristic look, with a sloped front and a high greenhouse. The headlights were installed closer to the A-pillars to protect them from small city crashes. In the front, where the normal cars had the radiators, the Leaf had the charging point behind the Nissan badge. The side view of the windows looked like a leaf.

Inside, the revolutionary design was noticed at the instrument cluster, where the dials were replaced by a TFT display. The speedometer was on a separate display placed on top of the dashboard. On the center stack, a big touch-screen was introduced to control various features of the car. The “gear-stick” was a rotary knob between the seats. In the back, there was enough room for three adults. Since the battery pack was placed underneath the floor, the seating position was higher than in a normal hatchback. 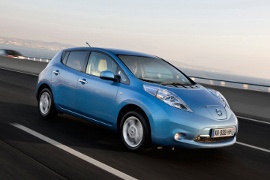