Nissan has a very long experience in off-road vehicles and one of its top-models is the Nissan Navara/Frontier pickup.

In 2016, this model surprised the market by launching the first vehicle in its segment with coil springs at the rear, whereas all the others offered leaf-springs. At the beginning of 2020, Nissan showed an updated version.

Some things are as good as they are and the Nissan Navara/Frontier King Cab is one of those vehicles, having been praised around the world. Now Nissan has added some changes, just to update it to the new rules and regulations regarding emission and safety norms. But the carmaker didn't have to work too much since the car was very good since its launch.

The revised 2020 Navara King Cab has new headlights and other small visual changes. But the real upgrade is underneath the surface. Under the hood, there is the same 2.3-liter turbodiesel engine from Renault, but both variants of it are twin-turbo. The entry model has a mere 3 hp increase to a total of 163 hp but has a bigger torque, reaching 425 Nm (313.5 lb-ft). The top version has the same 190 hp. Fuel consumption has been improved and now it has a combined value of 6.9l/100 km. The transmission offered is either a new 6-speed manual gearbox or the same 7-speed automatic as before.

For stopping power, Nissan has installed new 320 mm discs on the front and replaced the old rear drums with new 308 mm discs. Thanks to some other weight savings on the vehicle, the payload has been increased to 1165 kg (2598 lbs). 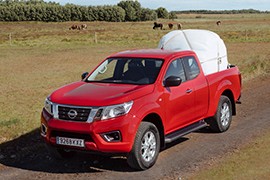 4 From One Horse to Over 600, Kelsey Rowlings Talks About Her Drifting Adventures