Nissan introduced a new generation of its Frontier pickup in February 2021 as a 2022 model year, and it was more than a utility vehicle.

The mid-size pickup was no longer just a workhorse, and many customers preferred them for their off-road abilities. Instead of towing a trailer with tools and materials, these vehicles were more often seen towing a trailer with motorbikes, ATVs, or ski-jets. The customers started to be more concerned about comfort features rather than metallic bumpers. Last but not least, they asked for better-looking vehicles, not just tools on wheels.

From the outside, the 2021 Frontier featured a completely renewed flat front area. Its LED headlights were unique on the market with their twin DRL light-strips design. The black grille sported the Nissan logo in the middle and a mesh pattern that mimicked a fence. Its tall bumper showed a cut in the middle to make room for a metallic shield, offered as an option. The beltline featured a small step on the front doors and a second one on the back of the rear ones from its sides.

Inside, Nissan installed a flat front-fascia dashboard with a slightly rounded instrument cluster where it placed a 7” display. A 9” infotainment touch-screen claimed the top side of the center stack. Like its predecessor, the Frontier was offered in two cab versions: King and Crew. Depending on the version, a 5- or 6-ft bed was fitted as standard.

Under the hood, Nissan installed a new, direct fuel injected, 3.8-liter V-6 paired as standard to a 9-speed automatic (dual-clutch) transmission. It was available with 2WD or 4WD with a shift-on-the-fly ability and a low-range gear. The carmaker installed an LSD as standard for off-road enthusiasts, while an electric locking differential was available on specific versions. 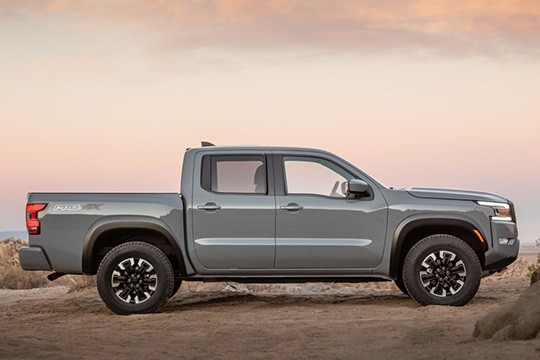