NIO introduced the ET7 as the electric-car with the longest range in the world and with enough performance to leave many sports cars behind with only the buzzing sound of electric motors.

When William Li introduced the NIO brand back in 2014, he promised a different approach to its customers, and he tried to keep his promise. His next promise was the launch of the NIO brand in Europe by the end of 2021.

NIO designed the ET7 as a four-door coupe fastback. Its aerodynamic shape and big batteries helped the car achieve a 1000 km (620 miles) range, which was more than any other electric car in the world at that time. At the front, the narrow line of the LED headlights stood above the front bumper. A set of air intakes in the apron and on the sides minimized the drag resistance. On top of the raked windshield, three cameras watched the road ahead and helped the autonomous driving system.

Inside, the carmaker installed a comfortable lounge for five adult passengers and, above them, a panoramic glass roof offered more light for the cabin. As expected in this segment, the instrument panel was completely digital, and the same went with the infotainment unit. Thanks to the big wheelbase, the ET7 offered ample room for the rear seat occupants.

NIO installed four electric motors on the car and offered a choice of three batteries, either for rent or for sale with the vehicle. Besides their ability to be charged at a dedicated plug, NIO offered the possibility to replace the drained battery with a fully charged one in less than ten minutes. 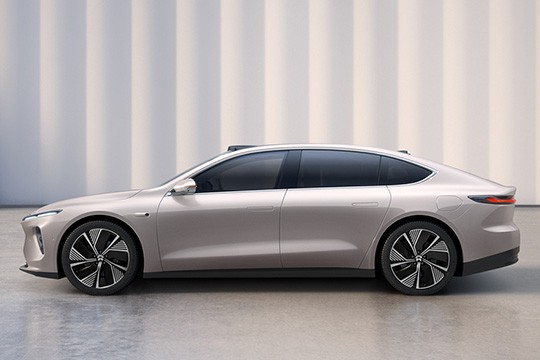 1 NIO Sedan Falls Off a Building: Chinese Automaker Promises to Reveal What Happened

2 NIO Officially Introduces the ES7, an SUV With the American Market in Mind

3 NIO ET5 Will Be the First Car Made at NeoPark, the Carmaker’s First Factory

4 NIO Has Sped Up Its Production Process, Already Has Its 200,000th Vehicle Made