When William Li launched the NIO brand in 2014, he promised a supercar that could compete against the most powerful vehicles on sale and kept his word.

Before starting the NIO brand, William Li was the NIO 333 FE racing team owner in the FIA's Formula E. The engineers showed their skills when NIO started developing a supercar, and the EP9 was ready to roll after just 18 months of development.

Introduced in 2016, the EP9 offered one-megawatt power. Its carbon-fiber bodywork and chassis helped the car obtaining an astonishing power-to-weight ratio of 784 hp/ton. Moreover, the car's active aerodynamic made the car corner faster. As a result, the EP9 lapped the Nurburgring track in 6m45.9, just a second slower than the Lamborghini Aventador SVJ. The flat and curved bodywork
showed a long and curved cockpit, with a design inspired by a speedboat. Its designer, David Hilton, signed the projects for various cars, such as the Bentley GT3 racer or the Infiniti Emerg-E concept car.

Inside the cockpit, the most shocking sight was the side head restraints that kept the occupants' heads fixed during high-speed cornering. The carmaker installed four screens in the cabin and not a single analog instrument. Its steering wheel was made by the same team that built the Formula E racing wheel. As for the seats, they offered the highest bolstering possible on the market.

In addition to the four engines mounted in all corners, the EP9 offered adaptive suspension and a fully autonomous driving mode, which was not approved for road use. But it was used to establish a track record on the Circuit of Americas, where it was slower than a racing driver. 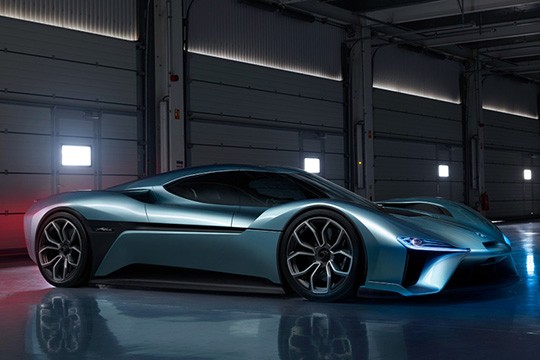 3 NIO Sedan Falls Off a Building: Chinese Automaker Promises to Reveal What Happened

4 NIO Officially Introduces the ES7, an SUV With the American Market in Mind

5 NIO ET5 Will Be the First Car Made at NeoPark, the Carmaker’s First Factory