Mitsubishi introduced the third generation of the L300 minivan in 1986 and sold it under different names globally, while the U.S. received it in 1987.

When the Japanese carmaker designed the third generation of the Delica for the Japanese market, it built it as a light-utility van adapted as a passenger version. But soon, it became a vehicle chosen by hotels and companies as a shuttle bus.

Its roots as a utility vehicle were evident, despite its raked windshield at the front. The flat front panel sported a pair of squared headlights with separate corner-mounted turn signals. As a people-carrier, it featured a sliding door on the passenger side. Thus, Mitsubishi eased the ingress and egress to the car for the second and third rows. The L300's side windows and a glass roof option made it ideal for resorts and touristic trips.

Under the hood, Mitsubishi installed a choice of two gasoline and one diesel engine, all paired to a five-speed manual. For the 2.4-liter version, the carmaker added an option for an automatic gearbox. 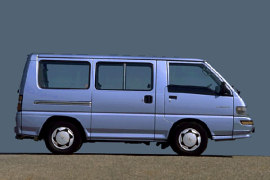